It is one of the most feared and commented situations by all divers. Ask to any diver if he has ever had narcosis and he will probably say “not me.” Nitrogen narcosis seems to have an associated negation, as if it makes you less of a diver if it happens to you. The truth is that, if you’ve been diving deep, or going down too fast, you’ve probably been a bit ‘tipsy’ on occasion and have felt the effects of narcosis and haven’t even noticed it.

In this post we are going to see a little about Narcosis, without trying to get into a sophisticated medical article.

It is a condition that affects the physical and mental state of people who breathe air or mixtures that contain Nitrogen at pressures higher than 3-4 bars. It consists of a reversible alteration of the state of consciousness of a person in deep diving with a bottle of compressed air, or any other mixture that contains Nitrogen. Produces an effect similar to alcohol intoxication (hence the name of drunkeness from the depths) or inhalation of Nitrogen oxide.

Narcosis is due to the fact that our body cannot process Nitrogen in the same way that it does with Oxygen when we are diving. Nitrogen alters our nervous system and that triggers narcosis. As we have commented, the effect is similar to excess alcohol in blood. Recent studies have revealed that Nitrogen narcosis occurs through the production, release, and absorption of some brain neurotransmitters.

The exact depth at which narcosis is established is difficult to predict, as each diver reacts differently, weight and fitness are included just as they would in alcohol poisoning. Some can feel it at 25 m, while others are barely affected at 50 m. The descent speed also influences a lot. It is generally accepted today that narcosis can occur when divers descend to depths greater than 30 meters.

When we are diving deep, we all experience to some extent a slowdown in reactions, a loss of coordination, and a cloudy feeling in the brain. As well as, from slight deterioration in performance to hallucinations and general anesthesia. It also produces euphoria and loss of reasoning. The deeper you go and the longer you stay, the more severe the symptoms will be.

Although narcosis is not dangerous in itself, the effects that it produces associated with the state of euphoria can be very dangerous, since there are divers who take the mask off, or the regulator of the mouth, to name just one of the things that an “underwater drunk” does, putting himself and the other colleagues in serious danger. Just as you would not drive a car while drunk, it can also be dangerous to dive when you are affected by narcosis.

It is not known exactly but some studies conclude that, by increasing the partial pressures of Carbon Dioxide generated by hard work or intense swimming, they enlarge the cerebral vessels and lead to the presence of a greater amount of Nitrogen in the brain. Other triggers, frequently mentioned, are alcohol consumption, hangover, tiredness, anxiety or apprehension.

Experts say that when compressed air is inhaled from an Oxygen bottle while under a lot of water pressure, the pressure of Oxygen and Nitrogen in the blood increases. This increase in pressure affects our central nervous system. But no one is sure of the specific mechanisms that make this happen.

If you are planning a deep water dive, make sure you are well rested, relaxed and dressed appropriately before attempting any dive. Avoid drinking alcohol beforehand as well and go down very slowly. 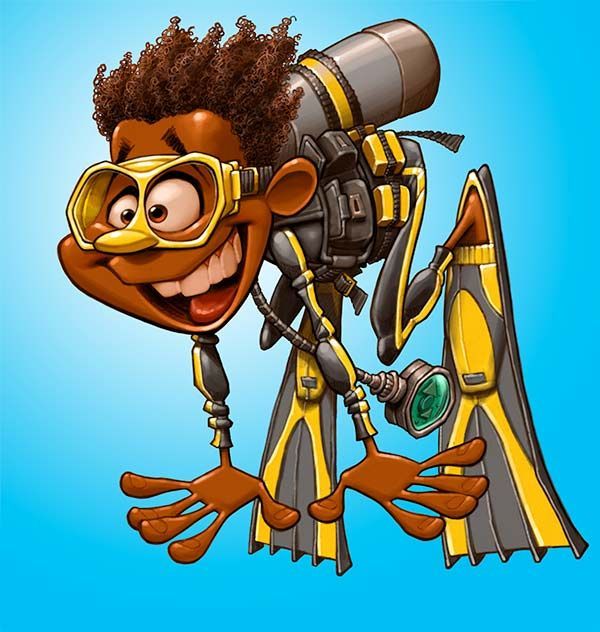 Can narcosis be prevented?

Unfortunately the only prevention is not to dive, but that is not what we want. Therefore, we must always keep in mind at what depth we are diving. There are “tricks” to detect narcosis. The first thing that is lost is the reasoning capacity and the euphoria. If we dive with Nitrox instead of with air, the possibility of suffering a narcosis decreases since Nitrox contains more Oxygen and less Nitrogen, the latter causing narcosis.

Our body cannot metabolize Nitrogen, in other words, it is useless. For this reason you have to expel it. Failing to do that, it is when narcosis occurs and can occur at any time, even at a shallow depth.

How is Nitrogen Narcosis Treated?

The main treatment for Nitrogen narcosis is to simply ascend a few meters or reach the surface of the water. Normally, when we are affected by narcosis and go up a few meters the effects usually pass. If the symptoms are mild, you can stay in shallow water with your buddy while you wait for the symptoms to subside. Once the symptoms are gone, you can resume your dive to a lesser depth. Just make sure you don’t go back to the depth where you had the first symptoms. In case you still notice the symptoms of narcosis when you have reached shallow water, you should end your dive and go to the surface.

You should seek emergency treatment if you experience the following symptoms after returning to the surface:

Before taking a deep dive (this should be valid for any dive), apart from the proper planning of air consumption, decompression stops, etc., it is very important to be well rested, fit and descend very slowly. You have to be aware of the reactions of your diving partner. It is important to note that, when diving with a buddy you are familiar with, it is much easier to recognize if she/he is acting strangely underwater than when diving with a new one. Always be on the lookout for any unusual behavior during deep dives; your buddy may not be acting irrresponsibly but showing symptoms of narcosis.

Indonesia diving in the Sulawesi North

Indonesia is undoubtedly one of the best countries in the world for us divers, for various reasons, they are more…

Palau probably the best diving in the world

Legend has it that, these islands were formed after the birth of a boy named Chuab. That boy became a…

The luggage of scubadiver traveller

We have finally  organized our diving trip, all the documentation ready and checked that we don't have an expired passport…

In this post I am going to talk about the largest marine park that has the Egyptian Red Sea, the…