Legend has it that, these islands were formed after the birth of a boy named Chuab. That boy became a giant and consumed all the food in town, and even some of the other children. These villagers were so concerned that, they decided that the only solution was to kill him. They built a bonfire and tricked him into standing in the middle of it saying it was for a special feast. Fire engulfed him and he fell into the sea. The parts of his body that protruded from the sea became the many islands of Palau.

The Republic of Palau is a country made up of hundreds of islands and islets (more than 300), and is one of the youngest states in the world. Its independence from the United States barely dates back to 1994, and its population is estimated at around 20,000 people. Palau is located in Micronesia specifically between the North Pacific and the Philippine Sea, so its marine life is influenced by two different environments. This creates an incredible amount of diving diversity, here are 650 types of coral and more than 1.350 species of fish. In addition to diving with sharks, we can see the Nautilus and for wreck lovers here we find some of the best wrecks of World War II.

In Palau you can dive all year round, but during the months of July to October it tends to rain frequently. In addition, there are some seasonal characteristics such as, the shark mating season is from February to April, the groupers spawn between May and June. Mobula blankets can be seen throughout the year but especially from December to February. The water temperature is warm, between 27 and 30º. Visibility exceeds 30 meters.

If you decide to dive from a hotel it is suitable for all levels, but in a life on board, an advanced level is recommended to enjoy all the diving areas, some with strong currents.

Do you want to know what we think are the five best places to dive in Palau? Keep reading and you will see.

It is the most popular. It is a vertical wall that extends to the South and is full of hard and soft corals and of precious giant gorgonians. The current here can exceed three or four knots, which is why it is usually done in the “Hood dive” style, that is, you anchor yourself with the current hook and leave yourself to observe the many sharks that frequent this area, such as the reef grays or white tips among others. Since, as you know, these “little animals” love the current.

German miners created this canal during the first part of the 20th century. Since then, coral formations have made the channel quite narrow, to the point that even life on board sometimes has trouble reaching the area.

The Wall of the “German channel” is where all the great diving happens, where a sandy bottom greets you 17 meters deep before bowing to even greater depths. The best part of the dive, in addition to the colorful coral, is an abundance of manta and gray reef sharks that can often be seen here. 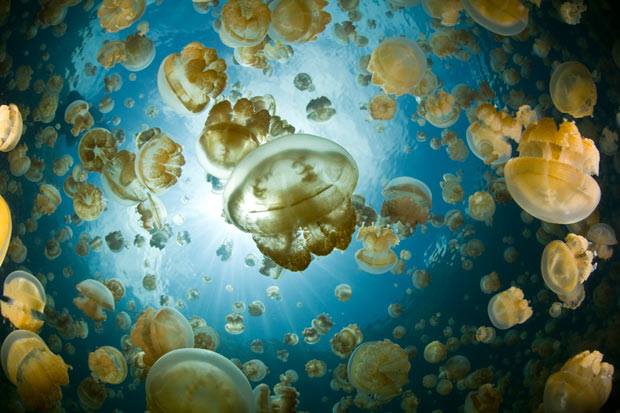 Peleliu Wall is one of the most beautiful and deepest wall dives in all of Palau. Home to deep canyons and crevices, “Peleliu Wall” is known for its wealth of pelagic life, and its steep walls are covered in large fans of the sea and beautiful coral.

In “Peleliu Wall”, you can experience a wilder dive because this site is located on the island of Peleliu, which is one of the most remote islands of Palau. This is also one of the deepest dive sites in Palau, with canyons, caves and crevices that are home to countless marine species.

This island was the scene of a bloody battle during the Second World War between the Americans on their way to Japan, and those who defended the territory to stop its advance. The remains of the battle are still visible today.

The Chandelier Cave offers a dive that is out of this world, but it might not be for divers who don’t like confined spaces, are claustrophobic, or feel uncomfortable in the dark. This small cave system consists of 5 connected caves, four of which can be easily explored during the dive. The fifth camera is a little more complicated. Each chamber has fresh air, making it possible to surface, remove the regulator, and breathe. Visibility underwater in caves is usually very good if the bottom remains intact. Each chamber is filled with the strangest stalactites and limestone formations that have formed over the millennia, and resemble beautiful chandeliers, hence the name of the candleholder cave.

Last but not least, for all those who like to take a look at the past exploring shipwrecks cannot miss this dive. Actually, there are many scattered around Palau, but Helmet Wreck is always a favorite among divers around the world. It is supported on a slope with the bow deeper than the stern. The maximum depth for this visit to this wreck is around 30 meters. The wreck is upright on the seabed and is fully embedded in various corals. There are many things to see and discover, for example, the canyon. The small supply vessel has been hit on the starboard side, and the blast left a massive hole, giving access to the main cargo hold. You’ll find lots of ammunition, rifles and helmets all over the wreck. The latter give the wreck its name.

Due to the variety of types of diving, its walls full of coral, shark areas, mobulas, its wrecks, caves, and unique places on the planet such as, the jellyfish lake, we say that Palau is one of the most complete dives in the world.

In this blog we are going to talk about the diet that a diver should, or rather should follow, especially…

Threat in the form of plastic

Everybody knows the problems caused by plastic at sea (and not only in the sea), set aside the pollution that…

Wrecks of the Red Sea, Umbria.

To explain the history of the Umbria, considered by many divers as the best wreck of the world, we must…

I would like to share with you my first experience in a diving trip. It had never crossed my mind…