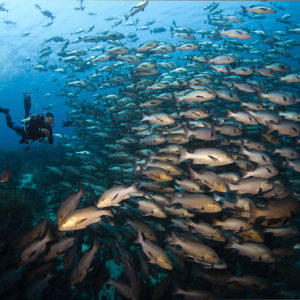 Diving in the Red Sea is the only opportunity in a tropical sea relatively close to Europe, just 5 hours away we find a fascinating marine world. Despite the large amount of marine traffic that plows its waters annually and the increasing number of divers that visit it, the Red Sea continues to be a marvel, one of the seas with the greatest visibility on the planet, with relatively little fishing activity and very little industry that contaminates its waters. Another circumstance is the oscillation of the temperature that causes the water to pass from 30º in summer to just over 22º in the coldest months, which oxygenates its waters and allows the coral to optimal conditions. Its currents also influence positively contributing nutrients and maintaining the trophic chain. 17% of the marine species that we will see here are endemic, that is, we will not find them in any other sea of ​​the planet. A sea with a great variety of routes and dives, spectacular reefs, mythical wrecks, caves, sharks, etc. What else do you want with only 5 hours of flight?

In Sharm el Sheikh you can enjoy a pleasant stay, near the famous Strait of Tiran where there are plenty of good dives, “Gordon reef”, “Wood house”, “Jakson reef”, endless areas for all levels. A little further away we can dive in the marine park of “Rhas Mohammed“, one of the best reef areas of the entire Red Sea and a little further away we will find the wreck area with the Thistlegorm as the big star. Stay at the “Camel Dive Club & Hotel“, experts who have already established themselves in what is now the heart of Sharm in 1986 and several times awarded as the best “Dive Cente” in the world by the prestigious British magazine Diver. Daily departures about 8.30 to dive, with two dives per day of diving and possibility of making a third. At the end of the day of diving we can relax in your Chill Out Bar, the most famous in Sharm el Sheikh.